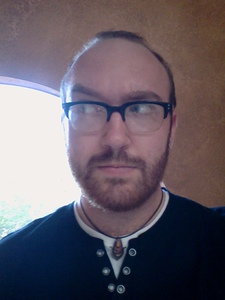 I'm unabashedly weird. I dropped out of Texas A&M to become an organic farmer because I wanted a life full of agricultural adventure. It didn't work out, but I realized I was pretty smart, so I went to NMSU, majored in Computer Science, and dropped out again, because I wanted a life full of startup adventure, and I knew if I wasn't crazy enough to drop out, then I wouldn't be crazy enough to work in a company with a 90% chance of failure. Sure enough, roughly one slightly rocky year later and I wound up in a CTO role, building insanely cool stuff, while working on all manner of quirky stuff in my free time for fun and profit, including a 3D game that runs in your browser, no plugins required (it's the second link). My goal in life is to become widely regarded as a smart eccentric weirdo, get featured in a magazine, and have people at conferences buy me drinks, because hey, free booze. I wanted to put down that I live in "Fort Awesome", but I can't. So yeah, I live in Downtown Albuquerque. Let's be friends and hit up Marble because it's within walking distance.

Where to Find Me:

Please confirm you own this profile by entering the email address used to create the account.